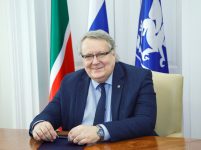 Professor Dmitry Tayursky, Dr. Sci. in Physics and Mathematics, graduated from Kazan State University named after V.I. Ulyanov-Lenin in 1985 with a degree in physics. In 2000 he received a title of Soros Associated Professor. Since 2011 he has recieved the title of Honorary Worker of Higher Professional Education of the Russian Federation. Since 2015 he is the vice-rector for scientific activities at Kazan Federal University.